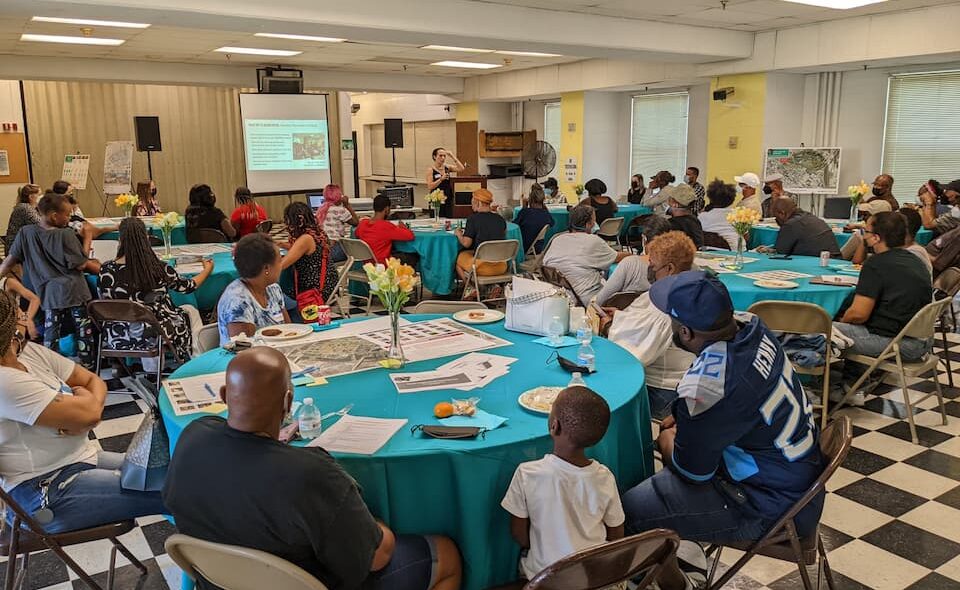 The meetings provided a review of the Choice Neighborhood Plan (CNP) process. Above all, they were an opportunity for everyone to share input about the current conditions of Gilpin Court and Jackson Ward, as well as their hopes for the future.

On June 14th, the team met with residents at Fay Towers for the Gilpin Court Resident Listening Workshop. They presented a review of the project timeline, input gathered from the residents and Jackson Ward community so far, and the next steps for developing:

After a brief Q&A forum, residents split into break-out groups to dive deeper into topics of interest, as well as to share their stories and discuss the current conditions of the neighborhood. Facilitators generated questions based on the three components of the project—housing, people, and neighborhood.

Among the questions facilitators asked was “What do you love about living in Jackson Ward?”

Some residents praised the proximity to the Greater Richmond area. Others celebrated the way that diverse socioeconomic groups live in harmony. One thing all attendees agreed on was their love for Jackson Ward’s history.

At the end of the workshop, everyone had the chance to vote for two of five Early Action Activities, which came from a pool of neighborhood improvement ideas brought to prior community meetings in May. The Community Plan’s Early Action Activities are an exciting opportunity to amplify the community elements that residents love, while also creating more opportunities to serve their needs.

The vote winners at this meeting were:

On June 16th, the team hosted another Community Listening Workshop at Gallery5, calling on residents throughout Jackson Ward.

After the break-out discussions, each group shared a statement describing what they hoped Jackson Ward would look like in ten years.

“We envision a Jackson Ward that invests in the people,” said one group. “Somewhere that builds culture from the ground up, honors history, works to change the perception of safety and combats systemic racism.”

Like at the Resident Workshop, community members then had a chance to vote for two Early Action Activities. The Calhoun Center Plaza and Splash Pad again proved the most popular.

At this meeting, the second choice was The Calhoun Center Garden Expansion, narrowly edging out the Greenway Corridor by a single vote.

Be sure to return for future updates on these exciting Early Action Activities!

Did you miss the Listening Workshops?

There will be more opportunities to participate! The next community meetings will take place at the end of July and the beginning of August. See below for upcoming meeting dates and links to additional meeting materials from the Gilpin Court Residents and Jackson Ward Community Listening Workshops.